Any organization that has been around along as this one is bound to have a few memories, stories and tall tales connected with it. The OVPL is no exception. Arnprior’s indoor range is often the centre of recollections. Although it is cozy and nicely heated now, that wasn’t always the case. Once or twice, the furnace did not keep up with January’s frost. The facts are few, and yet entertaining. They all have a kernel of truth (inside, where it’s warm).

What follows is a little more history.

The Smiths Falls Revolver Club was formed in 1955 with 15 members. Originally, the range was located in the basement of the town Firehall. In the mid-1960s the Revolver Club joined with the Smiths Falls Fish and Game Club Inc., as their Handgun Division. This provided us with an outdoor range for summer shooting, in addition to the Firehall facility.

This partnership continued until 1982. We then separated and formed the present Smiths Falls & District Handgun Club Inc., with 36 charter members. Coincidentally in 1982, the town of Smiths Falls closed the Firehall Shooting Range. We immediately built our own outdoor range, along Highway 15 south of Smiths Falls. In 1984 we opened an indoor range in the former Cadet facility, in the Smiths Falls High School.

This indoor range was used by our Club, and by the School Board for their student shooting program until 1999. Then the School Board closed the range, which left us with just the outdoor range. Thanks to property owner and charter member Slim Parsons, we shoot there today (2013).

At first, the Firehall Shooting Range was rather small and dingy with a cinder floor. We had 3 shooting positions and a 45 foot range. Since we could only purchase 50 foot targets, everyone’s score was slightly higher than usual. About 1980 we obtained a Wintario grant which allowed us to install a cement floor, improve the heating/ventilation, and to expand to a total of 5 shooting positions. The new positions were reserved for shorter shooters because that’s where the Firehall’s water heating pipes hung from the ceiling.

Over the years the Firehall Shooting Range was used by our Club, the local Boy Scouts, a few town police officers, and occasionally by Bank employees, of which I was one — my first time at this range. League shooters who were there in the winter will remember the entrance was via an outside stairway which filled with snow.

When the O.V.P.L. teams came to complete, we used a room in the nearby Town  recreation Centre which had been the former Central School. The range lobby area was quite small, so we set up scoring tables in the Rec. Center. Shooting was in the range, and we went next door for scoring the targets and socializing with the visiting team.

Early on, our Smiths Falls Team was unable to field enough shooters for a team of their own so our few members shot with an amalgamated team of Arnprior and Smiths Falls. Some of our Smiths Falls O.V.P.L. team members through the years included Harold Nichol, Gordon Beverly (Bev) Holdaway, Gordon Gladden, Graham MacInnis, Lorne Hunt, Robert Burke, Bill VanAndel, Bruce Brousseau, Jean Brasseur, Rick Bennett, Larry Brunshaw, Malcolm Blair, Yogi Sepp, Roberta Peets, and me. I’m sure there are others.

Currently Yogi, Roberta and I continue in the O.V.P.L., with an amalgamated team of our Smiths Falls Handgun Club and a rejuvenated Smiths Falls Fish & Game Club — Handgun Division.

In the early days of the Ottawa Valley Pistol League, two of the clubs had their own inter-club rivalry. The Smiths Falls Fish and Game club and the Arnprior Rifle and Revolver Association had a side bet for a dollar, as early as the winter of 1961.

Each time the two clubs met in League matches, they recorded the results on a dollar bill. When the two clubs joined forces to make the one “ARN-SF” team, the two principals continued to contest ‘the dollar’, individually. Arnprior’s Red Doolittle and Harold Nichol from Smiths Falls would compare their scores any time the two were shooting at the same event, whether it was at an OVPL shoot or not. Team or individual, indoors or out, the same dollar bill was contested over at least eight years. Harold Nichol and Red Doolittle in 2003

Yes, this was well before anyone could spend something they called a ‘loonie’. This was folding money – a paper dollar. At a match in April 2002, Red showed me the dollar with all its special markings. What follows is what we were able to read: 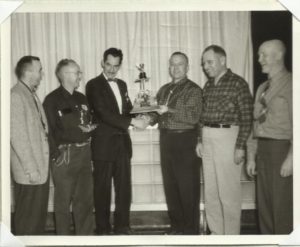 Recently, the Smiths Falls and District Handgun Club accepted the collection of George Bright Ryan, who was a member of the Smiths Falls Revolver Club in the 1950’s. Included was a photo taken at Smiths Falls Collegiate. A large trophy was being presented. 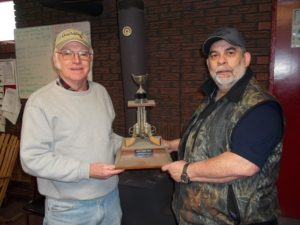 Several years later, I located the trophy at the club in Arnprior. It was stylized with three handguns (Young Buffalo Bill cap guns) and a victory cup. There was no
engraving on the cup. The plaque reads as follows:

The trophy’s place in Arnprior’s display case suggests that Arnprior and Smiths Falls might have contested bragging rights at one time in the past.