This past season emphasized the need for co-operation among our clubs. We have eight teams in the OVPL. The schedule called for 40 matches between Thanksgiving and Easter. With range closures and renovations, all those matches had to be shot at just three clubs. 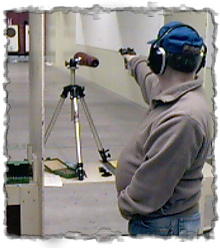 Arnprior, and the club at the RA Centre in Ottawa, served as host range for most of the extra matches. Many thanks to those two clubs for their help in accommodating our shoots. The Royal Military College team in Kingston was able to get range time from the Frontenac club. They were able to hold an extra shoot or two, as well.

Our league rules made two changes for 2000-01. Provisions for shooting Sport Pistol were introduced. This afforded Juniors and beginners easier access to our matches by allowing them to shoot the whole match with .22s.

The other change is really only evident this time of year. This year, the ranking of our teams was based on the teams’ average score, and not on their records of wins and losses. The change was made because the schedule of matches was unbalanced. The clubs agreed that a team’s position should be based on how well they shot, and not on how strong their
opposition was. As a result, this year’s champion isn’t the team with the best record, but they are the ones with the highest team average.

Congratulations Arnprior! OVPL champions for the first time since 1987.

The official rules for Standard Pistol and Center Fire changed in mid-season. We can expect to see the OVPL’s rules change again, next year. 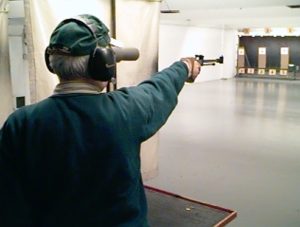 Again this year, the RA Gun club offered the members of OVPL clubs a chance to get together outside of the league format for a little Free Pistol shooting. A nominal entry fee is charged, and a small prize goes for the best score, and another for the best total after including the shooter’s chosen handicap.

Free Pistol is one of the oldest handgun events. It is shot with a .22 at a small target. Indoors, if the ten ring on the paper was a hole, it wouldn’t be big enough to put your finger through it. Free Pistols are single shot, long barrelled handguns with glove-type grips and very light triggers.

The RA also held a single match for the OVPL’s Air Pistol shooters, in January. It served as a warm-up event for those who were travelling to Toronto for the big Crosman competition in early February.

The OVPL clubs have shooters who do not participate in the league matches. Even they are learning of the hospitality of the Smiths Falls Handgun Club. The reason is the outdoor,
metallic silhouette shoots that are held in Smiths Falls.

The shoots are fun, low key and definitely not bullseye. The targets are cut-out silhouettes in the traditional south-western animal shapes. To score points, shooters must knock them over. The distance varies from 25 to 100 yards.