This past season has been one of stability and growth for the OVPL. The teams agreed to use the single round-robin format that worked in the previous year.

Growth? There were 96 people who shot in the league. Of those, there were 17 who were doing so for the first time. That does not include RMC, a team that has a large number of new people each year. Are there any women who shoot? Have you heard this question at your club? In 2002-03, a total of 42 matches were shot by the 11 women who shoot in the OVPL.

At the top of the league this year, the story comes from Kingston. The cadets had a terrific year. RMC sent four shooters to the US National Collegiate Pistol Championships in Georgia. Their small team of four finished 8th overall in North America. That was against the best specialists the American collegiate system had to offer, including teams of more than a dozen shooters from each of the military academies.

Leading the way was Simon Landry-Girard. Simon began shooting just four years ago. That was his first OVPL season. This was his last. Graduation and his military career await him. This year his was the best average in the league. His team? Perfect: 7 wins, no losses! RMC won the OVPL Championship for the first time since they joined the league in 1995-96. 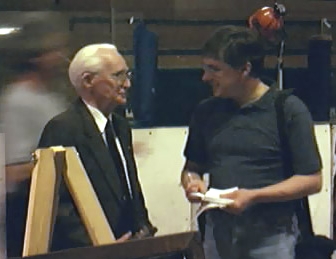 Elsewhere, OVPL co-founder Harold Nichol was inducted into the Smiths Falls Sports and Recreation Hall of Fame. Hundreds of residents gathered to recognize and honour Harold and the other inductees this spring. A well-deserved award: congratulations and thank you, Harold.

Again for 2002-03, each of the eight OVPL teams had seven matches – one match with each other team. The league championship is determined by the teams’ Win-Loss records. Ties are broken by viewing the match results among the tied teams.