This season saw one of the most popular OVPL events return to the calendar. The Arnprior club, led by Red and Willi, invited the League’s members and families to a Sunday barbecue in June. There’s nothing like spending a warm afternoon enjoying the company of friends and family in a relaxing atmosphere.

In other ways, it was a quiet season for the League. Again this year, there were five teams scheduled for twenty inter-club matches. Of the 40 matches that were to be fired by the teams, only 28 were actually shot. Between Labour Day and Thanksgiving, there was only one match day. In the spring, matches were held just three times, excluding an indoor make-up event.

Still, there’s reason for optimism. Among the 51 individuals at the matches this year, there were some new shooters. Eastern Ontario tried and enjoyed the concept of shooting two matches in one day, with different visiting teams in the morning and the afternoon. Smiths Falls was able to recover from some scheduling difficulties by holding a multi-team event on a single day in June.

The sport shooting community was saddened this year to learn of the passing of a friend and long-time participant. Michael Taylor shot in the OVPL from the 1960’s until he retired to British Columbia a few years ago. The eulogies from shooting organizations in the West were testimony that Mike did not retire from the sport. He was a contributing influence, regardless of his address. 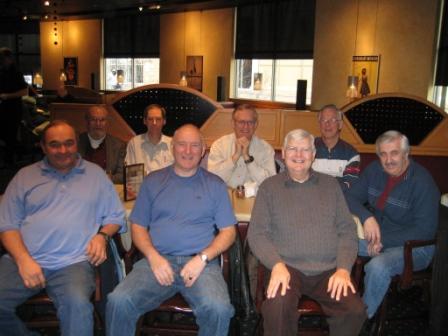 The standings are based on points from wins and losses.
Ties are broken first by considering the matches between the teams that are tied. See the Rules.