The OVPL conducted its season with the same five teams as last year: Arnprior, Eastern Ontario, NCRRA, RAGC and the combined team from the two clubs in Smiths Falls.

This year’s schedule called for a double round-robin series of home and away matches. It’s an arrangement that gives everyone a chance to visit all the clubs. Indoor clubs can shoot outside, and the outdoor club members have the opportunity to enjoy some comfortable, winter range time.

Unfortunately, only one team actually shot all its matches. Through the 20 match schedule, there were 8 forfeits, and 3 of those were not fired by either team. There were some good numbers, too. All but one team introduced new participants to the League’s matches. Of the 61 people who shot in our events, 15 did so for the first time. Special mention goes to NCRRA. Nearly half of their 18 shooters were new to the OVPL. 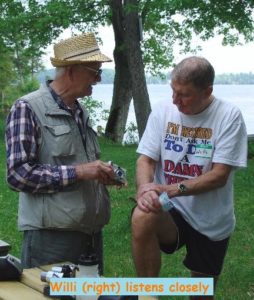 The OVPL teams were shocked to learn of Willi Koch’s passing in August. Willi was Team Captain for Arnprior, and he had been a ‘mover and shaker’ in that club, for some time. His enthusiasm will be difficult to replace.

The standings are based on points from wins and losses.
Ties were broken first by considering the matches between the teams that are tied.
See the Rules.