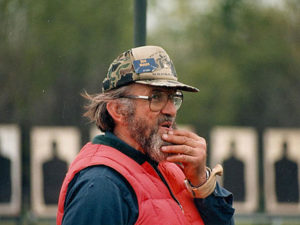 The League lost one of its most enthusiastic personalities this past winter. Since the late 1960’s, Don Moore was an OVPL shooter, supporter and Team Captain. For many in the League, he had always been there, making it possible – whatever ‘it’ meant. He was 84.

Don would have been pleased to see that NCRRA increased its number of participants in the matches this year. Overall, about a dozen people shot their first OVPL match this season.

There were twelve interclub matches in the unbalanced schedule for 2012-13. The RA club from Ottawa won its fifth consecutive title by winning all six of their shoots.

With an unbalanced schedule, the OVPL standings are based on these three criteria:

Fewest losses (each loss reduces the point total by 2, from the perfect 12)
Head to head record
Team average

Head to head: NCRRA and Smiths Falls did not meet.